WHAT IS MOTION BLUR REDUCTION? 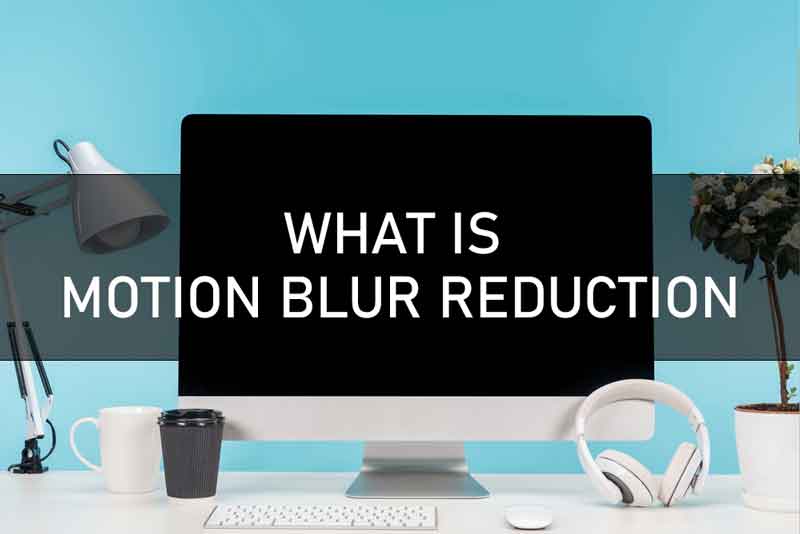 Motion blur is often referred to as ghosting and is caused when an image moves too quickly for the human eye to process it all at once. This results in a blurry or ghost-like image. The technology used in motion blur reduction gaming monitors helps to mitigate this issue by keeping objects on the screen more sharply focused. As a result, these monitors can provide a smoother and more immersive gaming experience.

Why Is This Happening?

Motion blur reduction technology works by taking a frame, or a set of frames, and strobing the backlight to illuminate only parts of the screen while leaving other parts unlit. This strobing happens so quickly that the user perceives it as an even backlight. However, when objects on-screen move too fast for the eye to keep up with, the backlight is strobed again to let more of those objects pass through.

In essence, this process makes on-screen images appear as if they are being shown at a higher refresh rate than they actually are by reducing blur and ghosting that would otherwise inhibit the smoothness of the gaming experience.

How Can I Know If My Monitor Is Motion Blur Reduction?

Modern gaming monitors usually come with a feature that lets you know this technology is being used. For example, manufacturers may label the monitor as “Motion Blur Reduction” or “MBR” on the packaging. Another way of knowing if your monitor has this technology is by looking for its availability via an OSD menu.

If you’re curious about the availability of this technology on a certain monitor that isn’t advertised as motion blur reduction, then simply look for its maximum refresh rate in Hz and consult our list below to see if it is listed as supporting a compatible strobed backlight feature. Just keep in mind that MBR may work at a range of refresh rates, but it is best optimized for these supported refresh rates.

High refresh rates are great for gaming, but they can also add a lot of input lag. In order to compensate for this, manufacturers have been implementing what is known as “response time speed,” or sometimes just “response speed,” into their gaming monitors.

Where motion blur reduction technology comes into play is by utilizing the fast response time speeds found in modern gaming monitors to deliver crisp images, even at lower refresh rates.

Blur Reduction Has a Variety of Names

motion blur reduction is not the only term used to reference this technology. It’s also referred to as strobe backlight, black frame insertion (BFI), backlight scanning, and double refresh rates. However, all these terms describe the same thing.

How does the Motion Blur Impacts Gaming Experience?

Ghosting can make objects appear out of focus and most traditional monitors at 60Hz will only refresh the screen 30 times per second. This means that any movement on-screen will create a blur effect, so anything in motion will look like it’s been smeared across the screen. If you’ve ever heard anyone referring to “ghosting” in monitor reviews, then you are familiar with this term.

Blur Reduction technology helps to alleviate the monitor’s light output by strobing the backlight with every frame during a fast motion to make objects appear sharper on the screen. This is similar to how CRT monitors worked, except it happens at a much faster rate.

Strobed backlight technology works by using fast response time speeds to deliver crisp images, even at lower refresh rates. This is because LCD monitors can only get so bright and cannot change their brightness levels very quickly.

With the widespread adoption of strobed backlight technology in gaming monitors, OLED (organic light-emitting diode) monitors are seeing a decline in sales. These types of monitors have been touted as the next step for gaming monitors because they can change their brightness levels very quickly, but OLED is currently much more expensive to produce than LED/LCD displays and so it’s not likely that we’ll see OLED gaming monitors anytime soon.

In short, strobed backlight technology does not work on OLED monitors because there is no backlight. However, it does work well on LED/LCD gaming monitors.

Manufacturers who use strobed backlight technology such as “MBR” or “ULMB” adjust the monitor’s brightness levels according to how fast the image changes on screen. For example, if the game is running at 60 frames per second (fps) and the monitor refreshes itself at 120 Hz, then it can adjust its brightness levels for every other frame. This allows the light output to be brighter when objects are in motion and darker when they are not.

A fast response time speed like 1 ms means that the monitor could change from one-pixel color to another in as little as 1 ms. When you combine this with a high refresh rate, it creates an excellent gaming environment.

It’s also important to note that motion blur reduction was not designed to cure motion blur completely. It is very difficult for LCD monitors to get rid of all motion blur because objects will always look blurry when they are in motion. It’s simply not possible.

Today, you can find motion blur reduction technology in a variety of monitors from 120 Hz to 240 Hz monitors and everything in between. In addition, not all motion blur reduction features are created equally. Manufacturers have implemented strobed backlight technology at different refresh rates and with varying pixel response times, so it’s important to do your research before making a purchase.

When you consider the differences between traditional monitors and those with blur reduction technology, it becomes clear why this technology is gaining popularity. Not only does it make objects look sharper and more defined on the screen, but it also creates an entirely new gaming environment that we haven’t seen before.

Lightning-fast gameplay – Strobe backlight technology can be adjusted much faster than regular monitors, which means that gamers will benefit from lower input lags. This is because the monitor is able to adjust its brightness levels according to how fast objects are moving on the screen, unlike traditional gaming monitors that adjust gradually.

A smooth transition from light to dark – Because speed and accuracy is so important, manufacturers have worked hard to create far more responsive strobed backlight technology than we’ve seen in the past. This means that objects will look very clear even during fast-paced scenes and when transitioning from one color to another (i.e turning from black to grey).

Color reproduction – Since strobed backlight technology can be adjusted faster than traditional monitors, it also means that colors will appear brighter and more defined. The graphics on the screen will look much sharper and objects will stand out even when they’re in motion.

What Are the Disadvantages of MBR Gaming Monitors?

There are some disadvantages to using motion blur reduction technology, but they should not be considered deal-breakers. It’s important to know about these drawbacks before making a purchase so that you can decide whether or not this technology is right for you.

Input lag – This one remains the biggest drawback to MBR technology. Even though strobed backlights can be adjusted much faster than traditional gaming monitors, they are still not quite as fast as having no strobe backlights at all. Some gamers report that there is a noticeable lag in gameplay when they use motion blur reduction technology, so it’s important to keep this in mind before making a purchase.

Price – motion blur reduction technology is expensive, even more so than traditional gaming monitors. This means that it’s not realistically feasible for many gamers to purchase this type of monitor because of the significant increase in price.

What Is Motion Clarity?

Motion clarity is a term that you’ll come across frequently when reading reviews and specifications for monitors with blur reduction technology. Manufacturers use the term “motion clarity” as a way to describe how well objects on the screen will appear during fast-paced scenes and transitions between dark and bright colors.

The higher the motion clarity, the better objects will look during extremely fast-moving scenes. This is because the monitor’s strobe backlight can adjust faster and with more accuracy, resulting in a smoother transition between light and dark colors.

Does OLED Have Less Motion Blur?

OLED display technology has less motion blur than traditional LCD monitors, but it still experiences the same disadvantages as MBR gaming monitors. The main drawback to OLEDs is that they’re expensive and not widely available just yet, but they’re gaining popularity and will likely become cheaper and more readily available within the next decade.

What Is a Backlight Strobing?

A backlight strobing or backlight blinking is a type of visual display technology that has been around for many years. In fact, this technology debuted as early as the 1970s and has been used in screens of all kinds ever since.

In recent years, strobe backlights have been combined with motion blur reduction technology to improve the response times of LCD monitors. This means that the monitor is able to adjust its brightness levels according to how fast objects are moving on the screen, unlike traditional gaming monitors that adjust gradually.

How Does a Backlight Strobing Work?

A backlight strobing works by “turning off” or dimming the display’s backlight quickly and repeatedly instead of making gradual adjustments. Since the backlight can be adjusted much faster than traditional gaming monitors, objects appear sharper and more defined even during fast-paced scenes.

It must also be noted that not all motion blur reduction technologies are the same. Some models utilize different ways to control their strobe backlights, which can result in less ideal performance depending on the type of screen being used.